Aurubis UK is part of the Aurubis Group which employs 7,400 employees at production sites in Europe and the US and sales offices all over the world. Aurubis in Hamburg is the largest copper producer in Europe and the global leader in copper recycling.

In January 2005 we became part of the NA (Norddeutche Affinerie) group when we became a wholly owned subsidiary of Prymetall.

As part of the Aurubis Group we have access to the many group resources, which can be called upon to satisfy customers specific requirements. 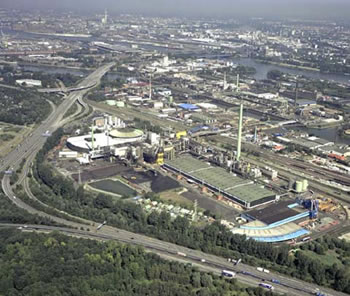 In copper production, high purity copper is produced first of all from copper concentrates and recycled materials in the form of marketable cathodes. In copper processing, Aurubis produces cathodes into high grade copper products. With 3 continuous casting lines for pure ETP copper NA is the main supplier to Schwermetall.

Aurubis Stolberg is a cold rolling mill in Stolberg which became part of the NA group in 2002. It is one of the leading European producers of semi-finished products made of copper and copper alloys and employs around 400 people. It produces around 80,000 tonnes per annum. These high grade rolled and drawn products are used worldwide in the electrical engineering, electronice, automotive and construction industries.

Schwermetall is the largest hot rolling mill for copper materials worldwide and is 50% owned by Aurubis Stolberg. Schwermetall produces around 300,000 tonnes per annum of copper, brass and special alloys employing around 320 people.