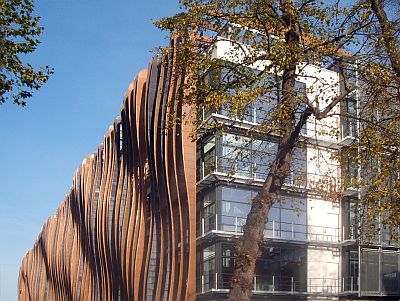 London’s Holland Park School has been completely redeveloped with a new building that takes an innovative, highly architectural approach to controlling and optimising sunlight, with a brise soleil of curved fins clad in copper and copper alloy supplied by Aurubis Architectural.

Maximising natural lighting with extensive glazing, while controlling glare and solar gain, proved central to architects Aedas’s strategy for design of the facades. But reducing visual impact of the long block on its sensitive surroundings close to Holland Park and with mature trees on site was also important.

The west facade is defined by a series of vertical fins - each clad in Nordic Brown pre-oxidised copper, Nordic Brass or Nordic Bronze - which combine to take on a strong, dynamic three-dimensional character. The mix of copper and its alloys gives a natural richness, with timeless yet contemporary qualities, as well as delivering longevity and minimising maintenance.

Vertical fins proved more effective in controlling glare while maximising daylight on this facade. A soft, sine wave curve was developed for their profiles, which gives an organic feel reflecting the nearby mature trees. The Nordic Brown, Nordic Brass and Nordic Bronze fins are thin in section, minimising the impact on views from inside the building. But their depth acts as an effective barrier to glare and unwanted solar gain from afternoon sunshine. Viewed from an angle, the fins come together to generate a stunning effect of dynamic sinuous wave forms across the façade.

Originally opened in 1958, Holland Park School became the flagship for ‘comprehensive’ education in England, known as the "socialist Eton" due to its impressive reputation. But by 2004, when an architectural competition for redevelopment was instigated, the school’s existing buildings were beyond economic repair and failed to meet modern demands, with inflexible accommodation and tortuous circulation. The greatest challenge for the architects was to design a new building to be built on the original site while the existing school remained in operation and that allowed part of the site to be sold to fund the construction but also left more usable external space than before.

The result is a new block, approximately 100m long and 30m wide. A large, 7m deep basement extends across the entire building footprint to a depth of 7m, accommodating the sports hall and swimming pool as well as kitchen and dining areas. The above-ground, five storey parts are conceived as two distinct halves united by a central atrium stretching its full length and linked by a series of walkways. The east half contains the more conventional teaching spaces and is constructed using in-situ concrete columns and flat slab construction. The west half is a more dramatic, steel A-frame structure enabling the larger teaching and assembly rooms. This structure then straddles the larger spaces within the basement to create clear-span spaces..