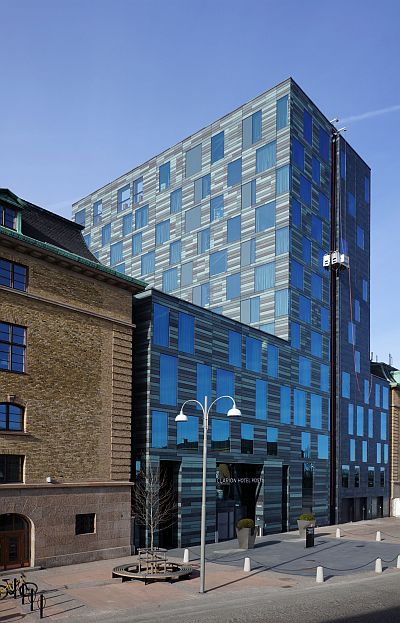 Architects Semrén & Månsson’s deceptively simple strategy in designing the Clarion Hotel Post was to close up the gap in the original building’s horseshoe-shaped plan with a new intervention. This comprises of one wing clad in patinated copper, the other slate - both materials used on the old Post Office roof. Where the wings meet, they rise up together as a pair of monolithic forms separated by a vertical sliver of glass. The resulting 13-storey tower creates a new landmark for the city.

The architects selected three different intensities of Nordic Green Living surfaces, created by varying the amount of green over the dark brown background. The combination of these elements enabled the creation of rich, animated copper surfaces. Nordic Green has properties and colours based on the same brochantite mineralogy found in natural patinas all over the world. It is produced by Aurubis Architectural, part of the world’s leading integrated copper group and largest copper recycler.

Other Aurubis Architectural surfaces include Nordic Blue factory-applied patinas, Nordic Standard ‘mill finish’ and Nordic Brown pre-oxidised copper with either light or dark brown oxidisation that otherwise takes time to develop in the environment. Copper alloys include Nordic Bronze, Nordic Brass and Nordic Royal - an alloy of copper and aluminium with a long-lasting golden colour.

At the Clarion Post Hotel, copper was essential to the architect’s concept from the start, referencing the original: the new building was seen as a young relative with the same DNA. They anticipated the new facades as thin construction, sheet cladding and their solution involved discrete panels, each prefabricated in the factory then installed complete on site to form a ‘curtain wall’ external skin, independent of the structural floors.

It enabled close control of the complexities of the design of individual panels within the overall façade layout, with different sizes of flush glazing and a varied, striated surface of Nordic Green Living copper. This was made up of copper in three strip heights – 200, 250 and 300mm. Corners are expressed with a modern take on traditional vertical ‘quoins’, seen on the original building, expressed as a thin strip and sometimes incorporating flush glazing amongst the copper. The façade grid remains uninterrupted throughout despite a rooftop sun terrace and open pool overlooking Gothenburg.

The Clarion Hotel Post site enjoys a pivotal location at the heart of Gothenburg, next to the central station. The new copper and slate tower responds with a civic role as an iconic urban focal point. It rises above the old Post Office when viewed from the major public square to the west and other key locations in the centre. It also signals the new town to the east, when viewed from the old centre, anticipating a new square in front - currently being planned.